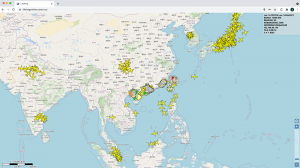 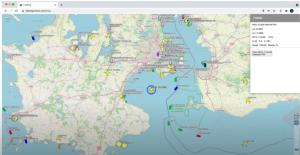 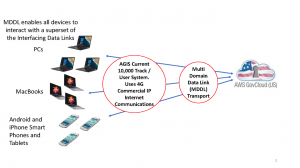 The AGIS MDDL On The AWS Cloud

The duality for functionality between C4I systems and operational systems has underscored the need for an integrated command management system.

The AGIS approach has been to avoid developing individualized interfaces, but to rather develop a common interface between all interfacing sensors and C5ISR systems”
— Malcolm K. Beyer, CEO

WASHINGTON, DC, US, September 23, 2021 /EINPresswire.com/ — In an article published in 2018 by Bryan McGrath for the Hudson Institute, titled “The Future of Navy Combat Systems”, he discussed the duality of need that exists between the C4I System(s) and the Combat System (CS) for the Navy and he advocated for the need for an Integrated Command Management System.

Since that time, there have been two more additional developments that merit our attention. One is an expansive and wide ranging emergence and growth of both classified and unclassified sensor data from satellites and UAVs. And two is the ever-increasing requirement to have an automatic integration of C4I systems with this growing volume of openly available sensor data.

AGIS has developed software that enables rapid interfacing among various sensor feeds from satellites and other intelligence sources together with the Navy’s and the other Services C5ISR systems. To accomplish this, AGIS has developed a message formatting software that processes received data from C4I systems and sensors (including some of those that are a part of the ships SSEE {Ship's Signals Exploitation Equipment] ) into a common multi domain data format and then translates the data back into the required interface format all within 1/10,000th of a second. This Multi Domain Data Links (MDDL) system is already an existing system that provides for automatically converting received intelligence data from both military and applicable commercial intelligence sources (i.e., AIS and ADS-B) into Link 16 and OTH-Gold formats for ingestion into a U.S. Navy combat system.

In support of the U.S. Navy’s desire to a move away from current model where many of these systems exist in independent silos, AGIS has been able to achieve a totally functioning System of Systems capability through over 14 years of work with the U.S. JCS J6 Lab in Suffolk, VA.

The AGIS approach has been to avoid developing individualized interfaces, but to rather develop a common interface between all interfacing sensors and C5ISR systems. Since all C5ISR systems and intelligence sensors generally use data links to provide their information, our approach has been to convert each interfacing data link into a common MDDL format can ingest the information contained in any of the data links.

By using the AWS GovCloud, the MDDL system provides massive sensor processing capability and translation of unclassified and classified reports creating an integrated Common Operating Picture (COP) between U.S. air, ground and sea and FVEY C4ISR systems without changes to their existing data links. The capability is scalable and easy to extend. AGIS makes existing interfaces immediately available. Thus at a very low cost, AGIS provides a rapid means of enabling integration with NATO forces and with other allied countries.

AGIS’ MDDL system operates on Windows 10 Laptops enabling it to run almost anywhere. And with customized hardware interfaces that have been developed by others it can interface with other systems. And in the future when the mission needs to add a new radar, weapon or laser component, these systems could continue to feed their data into to a single integrated command system, thereby providing the integrated functionality but avoiding the expensive process of replacing old servers and consoles.

To watch a 3 minute video of this revolutionary real time C4ISR system in operation – Go to: https://youtu.be/Qj9TD3_OK10

The above AGIS C4ISR AWS GovCloud video shows 10,000 plus real time aircraft and ship sensor reports being processed and displayed by our C4ISR MDDL system and shows processing and converting unclassified AIS and ADS-B worldwide feeds. In addition to its radar and ELINT processing, this C4ISR system also provides video and PTT between the network participants.