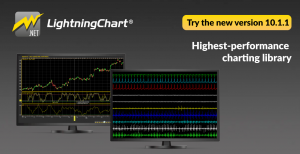 LightningChart® is achieving the impossible in the industry of scientific and big data visualization.”
— Pasi Tuomainen

KUOPIO, NORTH SAVO, FINLAND, June 18, 2021 /EINPresswire.com/ — LightningChart® has finally released its .NET charting library's newest version 10.1.1 that solves the problem that other commercial and open-sourced libraries had in high-performance including real-time visualization and resource consumption.

Our software development and data science teams have been working on launching an unbeatable updated version of LightningChart® for the past months. Our newest .NET Version 10.1 is a breakthrough in the scientific and big data visualization industry.

This translates, for the end-user, into an enhanced real-time data monitoring with an extremely high rendering rate, new data series designed for real-time applications, and extremely low resource consumption.

𝗛𝗶𝗴𝗵-𝗣𝗲𝗿𝗳𝗼𝗿𝗺𝗮𝗻𝗰𝗲 𝗜𝗺𝗽𝗿𝗼𝘃𝗲𝗺𝗲𝗻𝘁𝘀
For real-time visualization, LightningChart® .NET increases its rendering capacity and hits 𝟭𝟲 𝗯𝗶𝗹𝗹𝗶𝗼𝗻 𝗱𝗮𝘁𝗮 𝗽𝗼𝗶𝗻𝘁𝘀 𝗶𝗻 𝗿𝗲𝗮𝗹-𝘁𝗶𝗺𝗲 using a mid-level desktop PC. Additionally, the library allows the user to produce smoothly scrolling and sweeping real-time screens of thousands of lines. And having dozens of them opened at the same time. That is a lot of data!

Some of the new additions LightningChart® v.10.1 brings with it, is SampleDataBlockSeries, having up to 860% decrement in memory consumption, and 5100% decrement in CPU overhead. This shows a more consistent data flow on screens and a smoother visualization. The series type is particularly implemented in medical monitoring, industrial applications, and vibration analysis.

Moreover, the resource consumption when zooming and panning heatmaps is up to 100 times faster and has decreased its CPU load from an 80% to 20%.

“LightningChart® is a trademark from Arction Ltd., a pioneer in high-performance charting controls who introduced the fastest, GPU-accelerated charts for Microsoft .NET technologies and is developed full-time by a team of Data Scientists and Software Developers since 2009. Our mission is to produce the absolute best performance charts for .NET and JavaScript for advanced applications in demanding industries.”