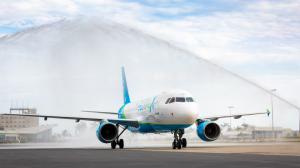 “We are thrilled to take delivery of our first A320 aircraft here at our base at MIA. We are building our airline around Airbus with the A320 and 321 in passenger configuration, and later this year with the first of many A321 cargo aircraft. We hope to operate the Airbus A330 aircraft as well. Today is a testament to the outstanding work of the GlobalX team as we continue to certify as a US flag carrier,” said Ed Wegel, Chairman and CEO.

The aircraft arrived at its new base, Miami International Airport, on Sunday afternoon and was welcomed with a ceremonial water cannon salute upon landing. This marks the first delivery of two aircraft scheduled for the first quarter of 2021.

GlobalX’s first A320 aircraft came freshly painted in its signature blue and green livery. The aircraft comfortably accommodates 180 passengers in an all Economy Class configuration, and features a large cargo hold capable of accommodating generous passenger baggage allowances. Upon completion of its FAA certification by late first quarter 2021, the A320 aircraft will immediately begin passenger charter operations throughout the United States, Caribbean, and Latin America.

"We extend our sincere thanks and appreciation to the leadership and team at GlobalX for their trust in Airbus and our A320 aircraft family. It’s an honor to welcome a new A320 and A321 operator in North America and support them throughout their expansion," said Airbus Americas Chairman and CEO Jeff Knittel.

"We look forward to a great relationship with GlobalX into the future,” he added.

GlobalX will provide charter airlift for major airlines, tour operators, professional and collegiate sports teams, casinos, and corporate groups. It will also operate direct to consumer charters under its own Part 380. The airline will operate from two bases at Miami International Airport (MIA) and Atlantic City International Airport (ACY).

About Global Crossing Airlines
GlobalX is a new entrant airline now in FAA certification using the Airbus A320 family aircraft. Subject to FAA and DOT approvals, GlobalX intends to initially fly as an ACMI and wet lease charter airline serving the US, Caribbean, and Latin American markets. For more information, please visit www.globalxair.com.