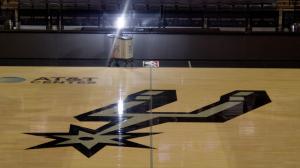 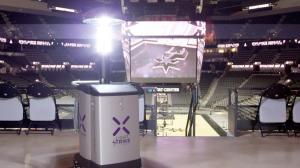 The significance of the San Antonio Spurs deploying LightStrike robots is that they've made a concrete commitment to the public; to employee; to fan; and to player safety”
— Morris Miller, CEO, Xenex

SAN ANTONIO, TEXAS, UNITED STATES, January 14, 2021 /EINPresswire.com/ — In the midst of the COVID-19 crisis; during the third week of the National Basketball Association’s 2021 season, the San Antonio Spurs become the only professional basketball team to debut and deploy the World’s First-Proven Coronavirus-Killing UV Ray Robot – the Xenex LightStrike.

The robots are disinfecting an array of player, public and front office areas.

According to a peer-reviewed study published in the journal, "Infection Control and Hospital Epidemiology," researchers concluded that, after a two-minute germ-zapping treatment, LightStrike is 99.99% effective at destroying SARS-CoV-2 — the virus that causes Covid-19.

The Xenex LightStrike Robot is the world’s most-powerful ultraviolet light ray, germ-zapping robot, according to the company and based on evidence compiled by more than 40 university and hospital peer-reviewed studies.

“There are a number of companies that make UV products,” explains San Antonio-based Xenex CEO Morris Miller. “They have all sorts of claims. We call those claims the theater of disinfection.”

He continues, “What we're talking about is scientific fact versus science fiction. Light Strike Robots are proven to kill SARS-CoV-2 in two minutes and was proven 99.99 percent effective. That was proven at the Texas Biomedical Research Institute and published in the journal of Infection Control and Hospital Epidemiology.”

Miller adds, “There are thousands of Light Strike Robots being used to kill SARS-CoV-2 and other dangerous pathogens at hospitals all over the world.”

“The significance of the San Antonio Spurs deploying LightStrike robots is that they've made a concrete commitment to the public; to employee; to fan; and to player safety,” says Miller.

“By deploying these robots, they're creating the most-disinfected environment in that arena that they can possibly have.”

“Our goal is to have the AT&T Center be the cleanest, safest arena in the NBA,” says Casey Heverling, Vice President and General Manager of the AT&T Center.

Heverling explains, “We're going to be deploying the Light Strike Robot in the locker rooms, the restrooms, the different dressing rooms for the entertainers, our conference rooms, our office spaces, the restrooms for our fans, the different concession stands, concourses, and then, of course, the visiting team locker rooms and facilities as well.”

The AT&T Center has a staff of about 100 people assigned to varying disinfecting and cleaning tasks, according to Heverling.

“It's a tremendous responsibility to bring thousands of people together to enjoy these moments on the court; to create memories with their families; and we take that responsibility very seriously," says Heverling.

"We spent a lot of time reviewing hundreds of different technologies, and, when we came across the Light Strike Robot and the UV technology it deploys, we knew we had to have that here because of its effectiveness in killing the coronavirus and creating the safest, cleanest environment possible.”

“The LightStrike Robot has a xenon lamp," explains Miller. "When you pulse that lamp, it puts out high-intensity, broad-spectrum ultraviolet light that breaks-down the molecular structure of a cell, preventing it from hurting somebody, infecting somebody, or replicating ever again.”

He adds, “There are thousands of Light Strike Robots being used to kill SARS-CoV-2 and other dangerous pathogens at hospitals all over the world.”

The robot’s rays radiate about 14-feet in diameter.

“People are looking for a COVID-conscious lifestyle wherever they go, whether it's a basketball game, a hotel, an airport, or their schools, they want the environment as disinfected as it can possibly be,” says Miller.

Prior to the pandemic, Xenex LightStrike robots were sold mostly to hospitals and healthcare facilities.

Since the start of the pandemic, Xenex LightStrike orders have increased 600 percent.

To help build more robots, Xenex awarded a $20-million contract to Astronics, Inc. It is an established aerospace and defense contractor that specializes in microelectronics and lighting systems.

LightStrike’s intense, pulsating bursts of xenon UV light are not only proven to destroy SARS-CoV-2, the virus that causes Covid-19; but the robotic room disinfection system also quickly deactivates C.diff, Ebola, MRSA, SARS and other viruses and pathogens, according to an array of studies.

Not for Use on Humans and Animals

LightStrike is not for use on humans and animals. It does, however, disinfect an array of surfaces. They include appliances, computers, countertops, doors, elevators, fitness equipment, floors, furniture, kitchens, lavatories, showers and much more.

According to the CDC, the coronavirus can remain active on surfaces for more than 14-days. There is evidence that people touching contaminated surfaces can get infected by rubbing their eyes, touching their faces, and other parts of the body.

Xenex Disinfection Services, Inc. is based in San Antonio, Texas.