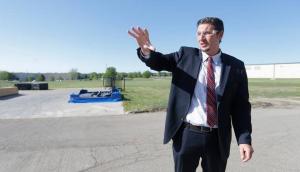 Hocine Benaoum is sharing some of the tips he’s picked up about how to use the psychology behind the science of developing activity from Europe to the U.S

DALLAS, TX, UNITED STATES, November 25, 2020 /EINPresswire.com/ — There are many reasons to open a branch in the United States for European companies.

In most cases, it’s due to the fact that the United States is the largest market of the world, and offers a large potential of growth vs the European Market that might be saturated.

Due to spending much of his career developing Aerospace activity in North America, Hocine Benaoum knows a thing or two about what gets to open a branch in North America. The Figeac Aero VP and GM is sharing some of the tips and tools he’s picked up about how to use the psychology behind the science of developing activity from Europe to the U.S and driving it into high gear.

1) For starters Hocine Benaoum says, “Doing business WITH the United States and doing business IN the United States” are two extremely different things. In the first case, you export your product and service: Price, Lead time, quality and strong relationship are what drive the expansion of the activity. In the second case, you export your know-how, your culture and ambitions.

2) Secondly, according to Hocine Benaoum, before “crossing the Atlantic ocean”, some due diligences are necessary, in order to benefit from this welcoming market, and live the American Dream.

Organic growth VS Acquisition: Starting from scratch or buying an existing company is in most cases the first question to ask; Both present opportunities and challenges.

Hocine Benaoum says acquisition seems at first sight to be the easiest, as teams are in place, certifications passed, Customers / Suppliers existing and already generating revenue; However, it’s important to check some key elements: If the acquired company was almost bankrupt, with continuous slow activity for years and your plan is to increase activity by 50% the first year, don’t expect a smooth transition; For the team in place, there is already a “company cultural shock challenge” linked with new ownership; then weather the headquarter is in France, Belgium or Germany, the European company needs to set up it’s goals bearing constantly in mind that it will not be a simple “copy and paste” of the European strategy, but start with the opposite : Understand the potential in US and in a second step present the strategy to Europe.

Hocine Benaoum says if you already have a strong customer base in place in the US and you’re thinking about installing your business from scratch, this solution presents a lot of opportunities such as “generous” government incentives (compared to Europe).

3) Hocine Benaoum also recommends to make sure to hire the initial right leadership team, and even more important, listen to them with “open mind”; They will be in charge to flow down and translate the strategy to operations on a daily basis. First, your team will rally around one another, helping to boost morale. You’ll see natural leaders emerge, according to Hocine Benaoum. You can use this information both to inform who you should be moving into supervisory roles, as well as to take some of the work of keeping employees on task off of your management plate. It’s key to have in place a strong basis before looking at any growth or ramp up.

4) In conjunction with a strong local team in place, it’s important to allocate some budget to send support from European Headquarter to support technology transfers if applicable according to Hocine Benaoum.

6) Make cultural differences an asset: From sharing few words in foreign language, food, celebrating French National day on top of 4th of July or sending US teams to Europe, every cultural difference is an opportunity to create a unique team spirit in the US plant according to Hocine Benaoum.

7) Hocine Benaoum says to keep always in mind you are an Outsider: Whether your business is a leader in your country or Europe, it doesn’t count in the US. Only your local performance will be recognized and will make your success. Approach your customers, your partners, your team with constant humility. American is known to be “customer centric” and it could be costly to ignore it;

8) Prevention is better than a cure: Whether you have a doubt about legal, finance, taxes or human resources, it is always safe and useful to seek help from local experts. Making sure is better than assuming and can save a lot of time and money down the road according to Hocine Benaoum.

After 11 years in the United States, and experiencing a lot of these challenges, there is no doubt in Hocine Benaoum mind that it’s definitely the place to be to boost your business and reinvent your business.

As we say here, the sky’s the limit!