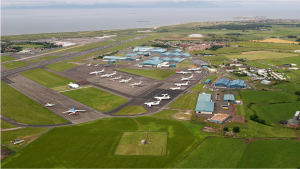 EDINBURGH, UK, November 20, 2020 /EINPresswire.com/ — A commitment to invest over £80m in a UK Space Centre of Excellence in Ayrshire, was made by both UK and Scottish Governments, in partnership with South Ayrshire Council, as part of the Ayrshire Growth Deal signing yesterday.

The funding package will develop and support a wide range of new, cutting-edge aerospace and space activities around Glasgow Prestwick Airport, including a satellite launch site and a range of other advanced technology initiatives beyond space launch.

This significant investment forms part of an even larger £250m package that was announced via the Ayrshire Growth Deal Head of Terms agreement 18 months ago. This saw the Scotland Office pledge to invest £103 million in the region over the next 15 years, alongside £103 million from the Scottish Government over 10 years, augmented with further investment from the three local authority areas of East, North and South Ayrshire. This will help drive economic development across the region, create new employment opportunities and encourage further inward investment.

Secretary of State for Scotland, Alister Jack, referred to the announcement as, “a landmark moment for Ayrshire”, adding that the deal would have a “profound positive impact on the region for generations to come”.

The signing of a deal of this size reinforces Ayrshire’s position as a leading UK aerospace hub. The region already employs over 3,500 people in global companies such as Spirit AeroSystems; BAE Systems; GE Aviation; Collins Aerospace; Woodward and National Air Traffic Services (NATS), accounting for more than half of the aerospace industry’s workforce in Scotland. The financial boost aims to add another 4,000 jobs by 2035, helping Ayrshire capitalise on the exciting opportunities offered by the fast-growing commercial space sector.

Ian Annett, Deputy CEO, UK Space Agency said, “The deal will deliver another boost to the UK’s growing space sector by funding a range of new, cutting-edge aerospace activities around Glasgow Prestwick Airport, including development of the spaceport site”.

“This will not only create highly-skilled jobs across the region, but also further the UK’s reputation as Europe’s leading new space destination and bring us one step closer to small satellite launches taking place in the UK.”

£80m of the Growth Deal investment will be used specifically to help realise Ayrshire’s vision of creating a leading cluster, for both space, and wider aerospace supply chain activity. Detailed plans are already in place for a spaceport development that would provide the capability to launch small satellites from within Europe for the first time, utilising modified aircraft that would begin their journeys from Glasgow Prestwick Airport. These aircraft will carry out rocket launches at high altitudes and provide access to the orbits required to observe Earth’s changing climate from above. The technique, known as ‘horizontal’ or ‘air’ launch, would make use of the existing infrastructure and coastal location at Prestwick, and the capability to launch satellites could make the UK a ‘one stop shop’ for commercial space companies.

Minister for Trade, Investment and Innovation Ivan McKee said: “The signing of the Ayrshire Growth Deal marks another major milestone in our journey toward the delivery of a world-leading commercial space sector. This is an exciting time for the emerging space sector globally, and Scotland is at the very forefront of it. In particular, the sector will play a critical role in the global fight against climate change with satellites used to measure essential climate variables”.

“In Scotland we already produce more small satellites anywhere outside of California and the provision of horizontal launch capability at Prestwick will further complement the launch offering across the country. This deal represents a major opportunity to inspire the next generation of space scientists and engineers as well as to deliver a major economic boost for Ayrshire.”

The innovative space activity, enabled by the ambitious Aerospace and Space Programme element of the Ayrshire Growth Deal, is expected to provide a host of opportunities beyond launch, too. The additional interconnected projects which are being planned include a technical innovation centre to support UK business and academia, a national flight test centre with training facilities for skills development, and an educational outreach and visitor centre. The deal also provides for various commercial building developments and improvements to the region’s transport infrastructure — improving quality of life for local residents and providing an opportunity for Ayrshire to profit from the rapid growth of the space sector.

John Innes, Chair of the Scottish Space Leadership Council described the announcement as "An exciting development that will ensure the UK remains at the forefront of new space applications, and keeps pace with the high-speed developments characteristic of the industrial space sector."

“I very much look forward to seeing vibrant, on-site, space activity that goes beyond launch facilities.”