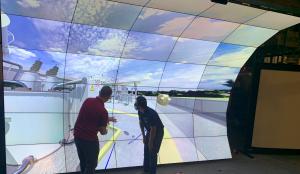 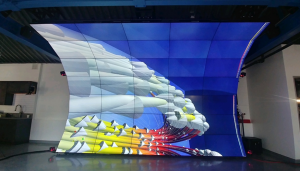 At Carnegie Observatories’ new VizLab astrophysicists can now look up into, and travel through, the universe’s most-ancient galaxies

I envisioned a space where teams could work together as they synthesize an unprecedented amount of data. 21st century data requires 21st century laboratories.”
— Juna Kollmeier: Inaugural Director

Mechdyne Corporation, an advanced technology powerhouse and pioneer in immersive display systems, today announced that it provided a 70 million pixel virtual reality display to the Observatories of the Carnegie Institution for Science in Pasadena, California. The unique, overhead curve of the large-screen visualization system was custom designed so that Carnegie’s theoretical astrophysicists can look up into, and travel through, the world’s largest three-dimensional map of the cosmos. The centerpiece of Carnegie’s VizLab is a 17-ft wide x 12-ft. high interactive virtual reality wall shaped like a cresting wave, allowing researchers, students and tour groups to better understand the universe’s most ancient galaxies.

“Science is collaborative and multi-disciplinary,” said the inaugural director of the Carnegie Theoretical Astrophysics Center, Juna Kollmeier, who leads the Observatories’ theory group. “But our workspaces are often solitary and siloed. I envisioned a space where teams could work together as they synthesize an unprecedented amount of data. 21st century data requires 21st century laboratories and Mechdyne designed and integrated a visualization system that made my vision a reality.”

The immersive display is made up of 35 high-resolution LCD panels that are both 2D and 3D capable, mounted on a curved, half-pipe framework. For virtual reality viewing, users wear movie-style stereoscopic glasses that create realistic depth perception. A lead researcher wears glasses with optical motion trackers that are monitored by precision cameras. As the researcher moves within the display, the position and orientation of their head is accurately tracked and used by the computer to present the correct perspective of the spatial data in real time.

This kind of immersion within Carnegie’s data sets, whether theoretical or gathered from the world’s most powerful telescopes, will unleash the value of human intuition and pattern recognition by displaying three-dimensional data in a way where depth perception, motion parallax, and peripheral vision provide context and deeper understanding. The new interface at Carnegie allows the astrophysicists to intuitively probe the 3D map of the universe side-by-side with swirling, colorful simulations of galaxy formation—seeing what aligns with expectations and what needs further interrogation.

Mechdyne, which has designed and built hundreds of large scale virtual reality CAVEs and walls, worked closely with Dr. Kollmeier and other astrophysicists at the Center to invent this striking and innovative workspace where researchers can share their concepts and discoveries from within their three-dimensional visualizations.

“Our process of understanding an organization’s workflow is essential to meeting the needs of designers, engineers and researchers like the ones at the Carnegie Observatories,” said Chad Kickbush, General Manager of Mechdyne’s Integration Business Unit. “We spent time onsite with Carnegie stakeholders and researchers to learn about what is most critical to them, how they intend to use the system, and the data analysis challenges they face.”

Kickbush continued, “Dr. Kollmeier knew that we can deliver virtual reality at the level of detail necessary to realize new insights from the galaxy data. Through further discussion we learned that the ability to look up into the visualizations, as if looking into the sky, would enhance the user experience so the upward curve was the right solution.”

In addition to its astrophysics research, Carnegie Observatories has a commitment to education and encouraging young people to pursue STEM careers. In a normal year, thousands of visitors pass through the Observatories’ halls for school visits, group tours, and an annual open house event. With the new VizLab, visitors will be able to experience the farthest reaches of the cosmos. Toward this end the CTAC team plans to hold a virtual event to introduce the institution’s fans and friends to their breakthrough display early next year.

About Mechdyne:
Mechdyne Corporation is a broad-based technology partner specializing in audiovisual and information technologies (AV/IT), visualization and software solutions, immersive virtual reality technologies, and technical support services. We address complex projects where an in-depth understanding of user requirements leads to the development of customized solutions involving elements of display, graphics computing, software, and professional services. Headquartered in Marshalltown, Iowa, Mechdyne serves a global client base that includes leading government laboratories, university and research centers, energy, aerospace, manufacturing, and medical organizations, as well as any other user of advanced technology.