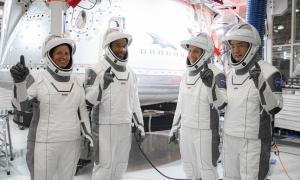 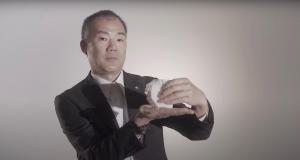 When Genius 100 was established, Astronaut Soichi Noguchi was “on board” to help. 3 years later, we are so proud to congratulate him on his 3rd space mission.

We are so grateful to Soichi (Noguchi) for the profound impact he's had on Genius 100. We are thrilled to applaud his historic journey – he's an inspiration for renewed creativity and imagination.”
— states Ambassador Ido Aharoni, Co-Founder and Global Ambassador of G100

NEW YORK CITY, NEW YORK, UNITED STATES, November 18, 2020 /EINPresswire.com/ — When the Genius 100 community was established in 2017, Japanese Astronaut Soichi Noguchi was “on board” to help. And now, three years later, we are so proud to congratulate Dr. Soichi Noguchi on his third mission aboard the SpaceX Crew Dragon spaceship.

On Sunday, as the world watched, Dr. Noguchi of Japan and three Americans, Michael Hopkins, Victor Glover and Shannon Walker blasted off from the Kennedy Space Station in Florida. His previous two missions were aboard the Space Shuttle Discovery in 2005 and a Russian Soyuz spacecraft for a 161-day stay on the ISS between 2009 and 2010. With his current mission, he will become only the third person to launch from Earth into orbit on three different types of spacecraft.

In addition to being a Japanese hero and brilliant, brave astronaut, Dr. Noguchi has also been part of another type of launch, that being the Genius 100 community. When the G100 was beginning to form in 2016, Noguchi’s efforts were instrumental in spearheading their first major initiative, the printing of a 3D publishing milestone, Genius: 100 Visions of the Future, in space. He helped to unveil this first-ever milestone at the ‘Celebrating a Century of Genius’ weekend event in Montreal, Canada in 2017, marking the official launch of the G100 global community.

The Genius 100 community looks forward to watching Dr. Noguchi, and the three others from the Crew Dragon along with the two Russians and one American they joined onboard the International Space Station, during their historic six-month adventure. At the end of its missions, the Crew Dragon deploys parachutes and then splashes down in water, just as in the Apollo era.

“We are so grateful to Soichi (Noguchi) for the profound impact he has had in development of the Genius 100 community,” states Ambassador Ido Aharoni, Co-Founder and Global Ambassador of G100. “We are so very proud of him for his many accomplishments and are thrilled to watch and applaud his historic journey. This has been such a challenging year but having something so exciting like this helps us to look to the future with renewed creativity, innovation and imagination.”

The Genius 100 Foundation, in addition to Dr. Noguchi, is composed of an astoundingly impressive community. As of 2020, the global non-profit organization’s group of Genius 100 Visionaries now includes a total of 16 Nobel Laureates.

Based in Toronto and New York, with a global footprint, Genius 100 Foundation is an active and engaged community of exceptionally imaginative and impactful human beings.

Since the founding of Genius 100, with the passage of time, a few members of their incredibly talent-rich community have become Genius Inspiritus, they are The Honorable Justice Ruth Bader Ginsberg, Sir Ken Robinson, Paul Allen – and Nobel Prize Laureates Shimon Peres and Harold Kroto.

The Genius 100 Foundation brings together Visionaries, philanthropic impact investors and its extended global community, collectively and in collaboration, to: re-imagine the future – implement creative initiatives to improve our world – raise the bar on what is achievable and make the impossible – possible.

Together with the entire Genius 100 Community around the globe, we congratulate “one of our own” Dr. Soichi Noguchi on his extraordinary accomplishments and his dedication to making the world a better place. He is an inspiration to so many – for so many reasons – we are thrilled to watch him inspire the next generation of geniuses.

###
About the Genius 100 Foundation
Genius 100, referred to as G100, was born out of the centennial celebration of Einstein’s Theory of Relativity (2016). To honor this landmark occasion, 100 of the world’s greatest minds were researched, selected, and nominated to contribute their vision of the future to the publishing of the first 3D book” Genius: 100 Visions of the Future.” Founded in Toronto in 2017, with a global footprint, Genius 100 Foundation is an active and engaged community of exceptionally imaginative and impactful human beings. The Genius 100 Visionaries are comprised of an extraordinary group of 100 globally recognized, accomplished, compassionate minds. The Genius 100 Foundation brings together Visionaries, philanthropic impact investors and its extended global community, collectively and in collaboration, to re-imagine the future – implement creative initiatives to improve our world – raise the bar on what is achievable and make the impossible – possible.

The Genius G100 Foundation Mission
We leverage the knowledge and resources of the G100 community to support impactful humanitarian and environmental initiatives through collaboration and funding structure.