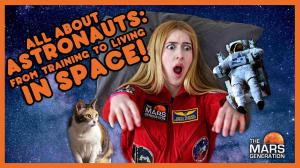 Every response to this pandemic matters. If there’s a way to help a teacher with a lesson or to offer up something new and engaging for a student, then I’m going to do that.”
— Abigail Harrison

The Mars Generation’s co-founder and president, Abigail Harrison, more commonly known as “Astronaut Abby,” made an offer via her social media channels, which have approximately 1 million followers collectively, inviting teachers, parents, and students around the world to submit student questions about space and STEM (science, technology, engineering, and math education) for the series. In each episode of this season, Harrison will answer questions submitted. The videos, intended to supplement curricula for students being schooled at home and via distance learning, are currently available for people around the world to watch for free on Harrison’s “Astronaut Abby” YouTube channel, and will soon be available on Instagram, TikTok, and Facebook.

“The coronavirus outbreak has been difficult for everyone as we collectively try to slow the spread of the virus. It has been an especially challenging time for educators, who are doing the vital work of staying connected to their students and maintaining curricula through distance learning,” said Harrison. “Every response to this pandemic matters. If there’s a way to help a teacher with a lesson or to offer up something new and engaging for a student, then I’m going to do that.”

Harrison has used her leadership and widespread global influence to increase focus on space exploration and STEM (science, technology, engineering and math) as vital to the future of humankind. She has drawn together international supporters from many backgrounds after she unapologetically shared her dream of becoming an astronaut and the first human to Mars at age 13 on Twitter. She is dedicated to inspiring people of all ages to build a future in which the innovation and advancement of space exploration will offer solutions to problems on Earth and beyond.

About The Mars Generation
The Mars Generation aims to excite, educate, and inspire all people about the future of human space exploration. Reaching millions of people since 2015, the organization has served students and adults from around the world through programs including the Student Space Ambassador Program, Future of Space Outreach Program, and Space Camp Scholarship Program. The Mars Generation is a 501(c)(3) nonprofit organization founded by the then-18-year-old aspiring astronaut, Abigail Harrison, and her mother, Nicole Harrison. Its advisory board includes astronauts, engineers, scientists, and professionals from the nonprofit and business communities. The Mars Generation is supported by private donors, members, influencer work, and major corporate sponsors. For more information, visit TheMarsGeneration.org.

About Astronaut Abby
At age 13, Abigail Harrison, now popularly known as “Astronaut Abby,” publicly shared her dream of becoming the first astronaut to land on Mars. Since then, Harrison has worked diligently to stay on course and pursue this dream, including earning bachelor’s degrees in astrobiology and Russian studies. Now 22 years old, she is a respected thought leader who is passionate and vocal about space exploration, and uses her widespread influence, leadership, and The Mars Generation, the nonprofit organization that she co-founded, to foster support and enthusiasm for human space exploration. Harrison has been hailed as one of the most influential people in STEM and has earned accolades for her leadership including Forbes 30 Under 30, Glamour Magazine College Woman of the Year, TIME Magazine and TIAA Difference Maker 100. She has worked with major brands, including Microsoft, Disney, 3M, Nissan, LEGO, Hulu, Kellogg’s, and Samsung to further her message, and has appeared on television networks such as Fox Business News, The Weather Channel, and BBC World. For more information, visit AstronautAbby.com.