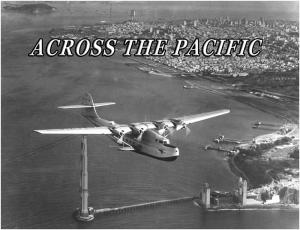 The first air route across an ocean 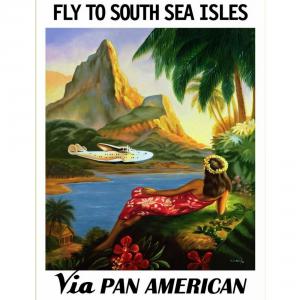 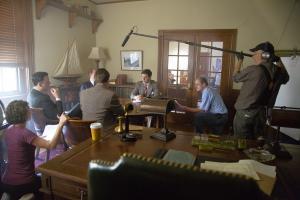 Photo from the production of Across the Pacific

SAN FRANCISCO, CA, US, May 19, 2020 /EINPresswire.com/ — Dateline: November 22nd, 1935 – Pan American Airways’ brand-new flying boat, the "China Clipper" winged west over San Francisco's still-unfinished Golden Gate Bridge, destination: Manila, over 8,000 miles away. Before then, the only way to reach Asia from the US was by ship, a trip that took weeks. Now a small fleet of remarkable Martin M-130 seaplanes would cross the Pacific in only five days, making overnight stops on new mid-ocean island bases. It was a revolutionary advance in global transport. But operating an airline across the vast ocean expanse posed lethal hazards. Many thought the idea was reckless, even foolhardy. It was nothing short of a breath-taking, win-or-lose all technical and commercial gamble.

On May 18th American Public Television begins distribution of Across the Pacific, a new three-hour documentary series about this aviation milestone, and the trailblazing events that led up to it. The just-completed program is the work of Moreno/Lyons Productions, an independent Boston-based media company, working in association with the Pan Am Historical Foundation, Inc. (PAHF), the premier source of authoritative information about Pan American World Airways. Virginia Public Media, the program's presenting PBS station, will premiere the series on May 21st.

How did Juan Trippe, the young visionary who led Pan Am from its start in 1927, manage to achieve this aviation breakthrough? It’s a gripping story, replete with political intrigue and high-stakes financial gambles, of technological innovation and masterful organization, and of barriers overcome and dreams achieved. Trippe enlisted top talent to pull it off: A brilliant radio engineer; a gifted aircraft designer; and a small cadre of dedicated aviation professionals, including Charles A. Lindbergh. It’s a remarkable story.

It had taken only eight years for Pan American to grow from a tiny three-plane operation with a single 90-mile route to become the world's largest and most dynamic airline. But bridging the mighty Pacific with an airline route confronted Trippe and Pan Am with a challenge much greater than any that had come before. A failure would mean disaster and the whole world was watching, spellbound.
In later years, Pan American Airways was synonymous with the advent of global jet travel and airline luxury and glamour. In the 1930s though, the world was in the midst of the Great Depression and drifting towards global war, Trippe was betting the destiny of his company and his vision of the future on the venture.

The producers went to great lengths and over five years, to craft this story for public television, skillfully using dramatic recreations of carefully researched historical events, complemented by insightful interviews with authors and historians. They uncovered long-lost archival photographs, recordings, and motion pictures that had been locked away for decades. Writer/Producer Stephen Lyons (The Mystery of Matter) brought together a talented and experienced team to create the series, including Emmy-award winners Lisa Wolfinger of Lone Wolf Media (Mercy Street) who directed the dramatic sequences, and Katha Seidman (Percy Julian, Forgotten Genius) who managed series production design.

The PAHF is a member-supported non-profit educational organization founded in1992. The Foundation is the premier source of authoritative information about the legendary airline, through its website www.panam.org, Clipper Newsletter, and other programs. The PAHF provided significant resources for Across the Pacific, complementing major support from the National Endowment for the Humanities (NEH), and other funders.
For Information about finding Across the Pacific on a PBS station in your area, and to see a short trailer, please go to: https://www.panam.org/about/606-across-the-pacific-film

Across the Pacific: short trailer