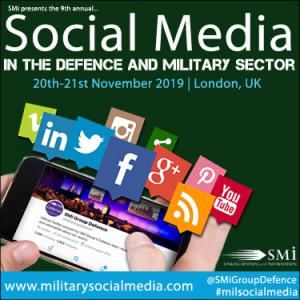 Social Media in the Defence and Military Sector conference 2019

SMi Reports: 16+ nations confirmed to attend the 9th annual Social Media in the Defence and Military conference in London this November

LONDON, UNITED KINGDOM, September 30, 2019 /EINPresswire.com/ — The Social Media in Defence and Military Sector conference will take place on the 20th and 21st November in London. As the importance of social media in the military and defence industries continues to grow, this conference provides attendees with the ability to look at the ways in which nations and key industry players are developing their strategies.

The conference is guaranteed to provide attendees with timely insight from industry leaders and the ability to network and interact with experts from leading military forces from around the world.

With less than two months until the conference, interested parties are advised to register at www.militarysocialmedia.com/EINpr7 to secure their place.

With that said, this year’s event is anticipated to be the biggest to date, with networking opportunities from a wide selection of nations including: Australia, Austria, Belgium, Brazil, Canada, Germany, Hong Kong, Italy, Norway, Singapore, Spain, Sweden, Switzerland, Tajikstan United Kingdom, USA and more.

There are also two pre-conference workshops commencing on the 19th of November. The first of which will be led expertly by a strategic expert with experience serving in the Irish Armed Forces and now VRAI. SMI’s second workshop will be hosted by the former Head of Communications Services, NATO Headquarters.

The full event programme and speaker line up is available for download from the event website at: www.militarysocialmedia.com/EINpr7

If you would like to showcase your solutions to key decision makers within the industry, contact Sadia Malick on +44 (0) 207 827 6748 or smalick@smi-online.co.uk

—END–
About SMi Group:
Established since 1993, the SMi Group is a global event-production company that specializes in Business-to-Business Conferences, Workshops, Masterclasses and online Communities. We create and deliver events in the Defence, Security, Energy, Utilities, Finance and Pharmaceutical industries. We pride ourselves on having access to the world’s most forward-thinking opinion leaders and visionaries, allowing us to bring our communities together to Learn, Engage, Share and Network. More information can be found at http://www.smi-online.co.uk