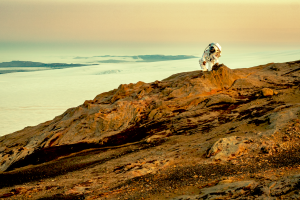 A world-renowned team ventures into an active volcano in Iceland to test the NASA-designed Mars suit on a historic Explorers Club mission.

REYKJAVIK, ICELAND, August 27, 2019 /EINPresswire.com/ — A team of renowned explorers and researchers journeyed inside the Grímsvötn volcano in Iceland and across the Vatnajökull ice cap, during harsh weather conditions and unstable terrain, to test the MS1 Mars analog suit in a martian-like environment. This was an Explorers Club flag expedition and suit designer, Rhode Island School of Design's (RISD) Michael Lye, a senior critic and NASA coordinator, joined the team along with Benjamin Pothier, who studies I.C.E. [Isolated, Confined, and Extreme] environments, to collect data at the remote location.

The Iceland Space Agency (ISA) led the successful mission to Grímsvötn, one of Iceland’s most remote terrestrial analogs. Terrestrial analogs are areas on Earth that mimic the conditions of other planets and moons and may inform how Martian life can exist on the planet today.

There are many locations in Iceland that have terrain, geology, and the intense environments that are similar enough to Mars to develop mission operations successfully. Mars missions or even long-duration lunar missions require different kinds of training, including seeing how groups work together over months and years in isolation, confinement, and extreme environments.

"One very important role of analog missions is to ensure that participants feel, act, and believe in what they’re doing so that the mission provides useful data for what might happen on Mars,” said MS1 designer Michael Lye.

The team traveled to the remote location and lived for six days in the Grímsvötn Mountain Huts, which had one room of bunk beds, no running water, and long days of work during almost constant sunlight. The group endured a few weather events and multiple technical failures yet consider the mission overall a success with the data collected.

This is a series of four expeditions for the Explorers Club and the mission had title sponsorship provided by United Airlines, as well as prominent outdoor and adventure brands.

Please see the EPK, photos, and more information at https://www.icelandspace.agency/