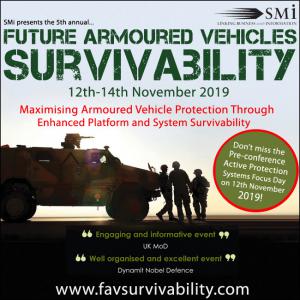 LONDON, LONDON BRIDGE, UNITED KINGDOM, August 7, 2019 /EINPresswire.com/ — Modern sensors and the rapid increase of sensor technology is one of the biggest challenges in armoured vehicle survivability. Increased awareness and detection capabilities can keep armies ahead of adversaries in an operational situation, significantly increasing target acquisition capabilities and first-hit likelihood.

For those who would like to meet and learn from Lt. Col. Routledge on how the British Army are improving their operational effectiveness and capabilities, attend the upcoming conference and Active Protection Systems focus day this November.

For those who would like to register for the conference, there’s an early bird discount of £100 that will expire on the 30th September 2019, secure your place at www.favsurvivability.com/ein4

For details on tailored sponsorship and branding packages, please contact Sadia Malick on +44 (0) 207 827 6748 or email smalick@smi-online.co.uk