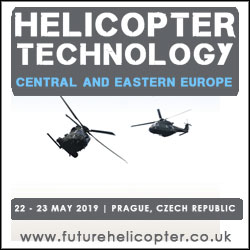 In under 4 weeks’ time, Helicopter Technology Central & Eastern Europe is opening its doors to heads of Air Force and Helicopter Programme Managers in Prague.

Delegates of the two-day event will benefit from comprehensive briefings on the crucial topics of modernisation and readiness of regional rotary fleets, procurement goals, national security, operations and interoperability, platform and programme upgrades, and more.

A key focus of the 2019 conference is the importance of collaboration between nations and allies, including international support from the US, as well as collaboration involving NATO and Eastern European nations. This is vital for improving collective military strength, joint defence and security initiatives, and enhancing interoperability.

Key Sessions on International Rotary Collaboration from the US Air Force, JAPCC & EDA:

Previous years’ Helicopter Technology events have been praised by leading defence forces in both Central and Eastern Europe and have hosted more senior heads of Air Force and Helicopter Commands than any other helicopter event in Europe.

This year’s event will host an international gathering of senior military and industry speakers and attendees as they share key perspectives on programme updates, training, rotary collaboration, procurement goals and new technologies.

The event brochure with the full agenda and speaker line up is available online at http://www.futurehelicopter.co.uk/einpr, where interested parties can also register.