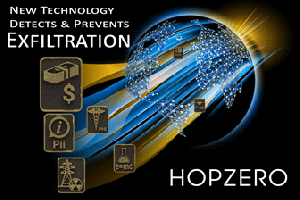 Click to see vital data tragically exfiltrating to the World!

Mr. Jordan comes to HOPZERO from Packet Design, the leading company for monitoring network route analytics, where he was a key member of the engineering team. Prior to that he worked at NetQoS where he developed the engine of first real-time, agentless Application Performance Monitoring tool, SuperAgent. He also developed the first truly scalable NetFlow data collector for analyzing and reporting on enterprise-wide network traffic. Mr. Jordan was recognized as a NetQoS Fellow for his contributions and has been awarded multiple patents for high performance computing. He holds a Master of Engineering degree from Cornell University.

Dr. Mullarkey has been awarded patents in signal analysis including, detection of network anomalies for his work at Schlumberger and NetQoS. At NetQoS he was a key member for the research team, including leading the use of NetFlow data to detect network intruders. NetQoS recognized Dr. Mullarkey as a NetQoS Fellow for his achievements. Dr. Mullarkey also was a founder of Rocksteady, a developer of VPN solutions to secure enterprise communications. He also developed advanced simulation technology at Maxager Technology that developed software for manufacturing data analysis using profit velocity concept. Dr. Mullarkey earned his PhD from Carnegie-Mellon University.

“We are excited to have engineers with incredible track records of achievement and deep knowledge of computer networks join our efforts to transform information security,” said Ben Haley, founder and SVP of engineering at HOPZERO. “We have seen and felt the threats posed by cyber attacks. HOPZERO has a revolutionary vision to stop these attacks. David and Peter are incredibly prepared and possess the ability and creativity to help HOPZERO scale to achieve that vision.”

HOPZERO has created an intelligent data control system to classify and protect data that should stay inside an organization, out of reach from outside or inside cyber criminals. The system protects information, and prevents data exfiltration, with a virtual perimeter. Attempts to breach that perimeter are blocked and an alert issued indicating precisely where the attack came from and what they were after for rapid remediation.

About HOPZERO
HOPZERO is the pioneer of a revolutionary SaaS solution securing information by controlling the distance it can travel – where compromised data self-destructs. HOPZERO “puts data on a leash”, long enough to do business yet short enough to prevent compromise. HOPZERO is headquartered in Austin, Texas. HOPZERO.com/videos HOPZERO.com